Abed-Rabbo: “Leadership To Call For Comprehensive Meeting on Jerusalem” 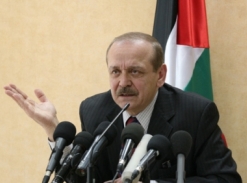 Yasser Abed-Rabbo, secretary of the Executive Committee of the Palestinian Liberation Organization (PLO) said that the Palestinian leadership intends to call for a comprehensive meeting for all factions in order to take a national stance to counter the Israeli aggression and violations in Jerusalem. He hinted that the PLO would also resort to the Security Council in an attempt to oblige Israel to stop its violations in the city.

Abed-Rabbo stated that Israel is conducting unprecedented provocative acts in Jerusalem. and is acting on wiping the Arab history and geography in the city and its holy sites.

Commenting on calls made by some factions to start a new Intifada, Abed-Rabbo said that the Palestinians are human beings and “do not operate by a remote control”.

He further stated that Israel is trying to drag the Palestinians into a new battle field in order to distance them from any political process.

Abed-Rabbo said that the leadership will call in the coming few days for a comprehensive meeting to determine the appropriate means to counter the Israeli occupation and its policies.

The Palestinian official added that it is likely that the leadership would resort to the Security Council to demand the International Community to act against the Israeli violations.