15 Palestinians Deported From Jerusalem For 15 Days 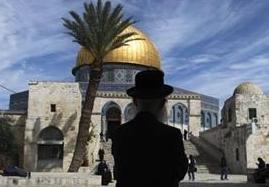 The District Court in Jerusalem decided to expell 15 Palestinian natives of East Jerusalem out of the city of a period of 15 days, after they were detained by the police during the recent clashes. The 15 Palestinians will not be allowed in the Old city and in the Al Aqsa Mosque area for 15 days.

One of the lawyers of the Palestinian Prisoners Society (PPS) reported that he represented the fifteen detainees at the Israeli Court. Besides being illegally forced out of their city for fifteen days, the court ordered them to pay 5000 NIS each.

The lawyer added that the court also delayed hearing of several other cases as the Israeli prosecution said that it will press charges against them.

He stated that he managed to have the police release six detainees as they are children between the ages of 12 and 14.

Tension continues to mount in Jerusalem as fundamentalist settlers are ongoing with their violations against the Al Aqsa mosque, the Dome of the Rock and Palestinians homes and property in East Jerusalem.

At least 38 Palestinian civilians were injured by Israeli police fire during clashes in East Jerusalem on Tuesday, following several days of protests that also resulted in injuries of Palestinians.

The clashes took place after fundamentalist Israeli settler groups opened a synagogue on Monday near Al-Aqsa mosque in East Jerusalem.

Tension was high in Jerusalem as Israel declared intentions to build 50,000 new housing units for settlers in the city last week.

Since Friday of last week, Israel has completely sealed off Jerusalem, preventing all West Bank residents, including those who have permits, from entering the city.

Also, Israeli police prevented all Palestinian men under the age of 50 from entering the Old City. The Israeli government decided to lift the closure on Wednesday.