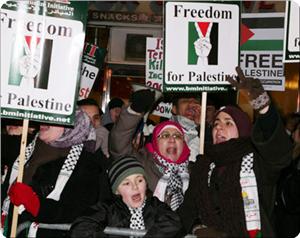 Hundreds of Arabs, Muslims and British nationals held a protest on Monday evening in the center of the British Capital, London, to protest the visit of Jerusalem Mayor, Nir Barkat, who was invited to speak in London. Ahmad Al Turk, spokesperson of the Palestinian Forum in the U.K. said that the protestors were angered by the British government for inviting Barkat instead of prosecuting him for demolishing dozens of Palestinian and Arab homes in the Old City of Jerusalem.

Barkat is also behind the decision to construct 1.600 homes for Jewish settlers in occupied East Jerusalem.

He plans to double the number of Jewish settlers in Jerusalem and approved a plan to build 50.000 homes for the settlers in the city.

The Badil Center for Palestinian Residency and Refugee Rights called for “a protest against the ethnic cleansing of Palestinians from East Jerusalem”.

The protest was organized by Palestine Solidarity Campaign, Stop the War Coalition, British Muslim Initiative, Jews for Justice for Palestinians, Friends of Lebanon, Friends of Sabeel UK, Architects and Planners for Justice in Palestine.

The protestors, approximately 300, slammed the visit of Barkat and demanded the British government to arrest and prosecute him for his violations against the indigenous Palestinian people in Jerusalem.