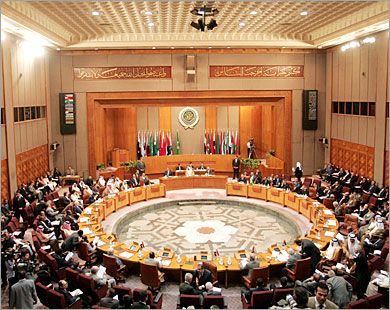 Amro Mousa, secretary-General of the Arab League, stated Saturday that the Arab countries should prepare for the possibility for a total collapse of the Palestinian-Israeli peace process, and should start weighing different options.Mousa did not state what are the alternatives to revive peace talks, but stated that the Arab Peace initiative was presented to Israel eight years ago, but Israel rejected it.

During their 2002 Summit in Beirut, Arab countries offered Israel a full normalization and peace with the Arab and Muslim worlds in return for its withdrawal from all Arab and Palestinian territories it illegally captured after the June 1967 war.

But Israel refused to accept the offer as it is, and said that it needs modifications as it is not willing to conduct full withdrawals from the West Bank and the Golan Heights, and is not willing to hold any talks on Jerusalem, borders and the refugees.

Israel also insists on keeping its main settlements and settlement blocs in the occupied West Bank, including in occupied East Jerusalem.

During his speech at the Arab Summit in Libya, Mousa said that there is a need for a new approach to peace, and added “the Arab countries must prepare for the possibility of the total collapse of peace talks”.

“We must be aware, must be ready for the possibility of a total collapse of peace”, he added, “we must find alternatives, the current situation is unprecedented”.

He further said that the peace process entered a new stage, “possibly the last state, the Arabs accepted and recognized the efforts of mediators in peace talks”.

Saturday marked the beginning of the 22nd Arab Summit in Surt (Sirte) city in Libya with the participation of Arab leaders or their representatives.

The summit is entitled “To Support The Steadfastness of Jerusalem”, it is attended by twelve Arab kings and presidents, while senior officials of other countries are also representing their countries.