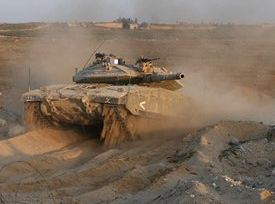 Several armored military vehicles carried on Sunday morning a limited invasion into Khan Youni, in the southern part of the Gaza Strip. The latest attack comes admits talks of a likely resumption of assassinations in the coastal region. Israeli Finance Minister called for “reoccupying” Gaza and “eliminating Hamas”. Eyewitnesses reported that several armored vehicles and military bulldozers advanced 500 meters into the area, and that military bulldozers started uprooting trees and farmlands while the army opened fire in different directions.

The paper added that this cease fire gave the resistance a chance to attack the Israeli army along the border with Gaza, such as the Friday attack that led to the death of three soldiers.

A number of military leaders said that the known policy of bombarding tunnels and “weapons storage facilities is not affective anymore and does not curb further attacks”.

Senior Israeli military leaders stated that the current situation requires the resumption of the assassination policy.

They are calling for assassinations targeting certain political and military leaders of Palestinian factions in Gaza, especially prominent figures.

The Israeli army believes that after the Friday attack and the killing of the soldiers, several leaders in Gaza went underground fearing Israel’s retaliation.

The army estimates that those leaders would resume their activities in the future, therefore “the army must prepare plans to assassinate them”, and should also bombard certain areas believes to be used by the resistance.

This includes tunnels, resistance training centers and areas believed to be weapons storage facilities, in addition to bombing the homes of political and military leaders of Hamas and other factions.

Israeli Finance Minister, Yuval Steinitz, called for “reoccupying Gaza” and to totally eliminate the authority of Hamas in the coastal region.

He said that reoccupying Gaza and eliminating Hamas, the ruling “power” on Gaza, are among the main scenarios that Israel might elect should other options fade.

Steinitz slammed what he called “the U.S. pressure on Israel”, and claimed that Israel conducted acts of “good will” towards the Palestinians by “giving them the chance to improve their economy” and by “freezing settlement activities”.