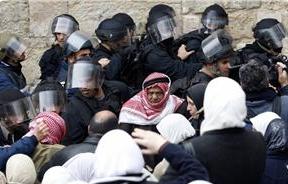 Local sources reported Monday that clashes took place between Palestinian youths and Israeli policemen near the Al Aqsa Mosque in occupied East Jerusalem. The clashes erupted after a group of fundamentalist settlers broke into the yards of the mosque during Pesach celebrations.

The police restricted any Palestinian under the age of 50 from entering the Al Aqsa mosque or its yards while the Jews celebrated the Passover weeklong holiday.

The police said that all non-Muslim Palestinians and all Muslims below the age of 50 will not be allowed to enter the Mosque.

The measure, not new in nature, was accompanied by several restrictions and a strict closure scheduled to last until April 6.

Dozens of Palestinians were wounded in recent clashes in East Jerusalem as fundamentalist settlers continued their attacks in the Old City, and admits further plans to construct and expands Jewish settlements in the occupied city.