Thousands March In Paris Against Israel’s Violations In Jerusalem 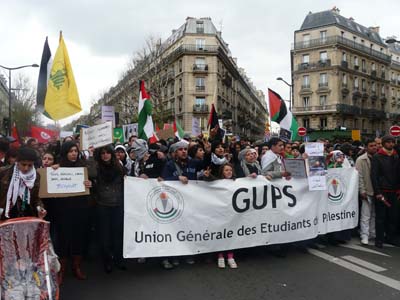 Arab member of Knesset, Dr. Jamal Zahalka, participated in the protest along with leaders of the Arab and Palestinian communities in Paris.

The Palestine Students Union also held an event on Monday evening marking Land Day (March 30) and against the Israeli violations in Jerusalem.

Archimandrite Attalla Hanna of the Greek Orthodox Church participated in the event and saluted the protestors and the participants.

He said that the Palestinians, Muslims and Christians, will always remain steadfast defending their land and country.

Meanwhile, Dr. Zahalka gave a speech explaining the situation of the Arabs in Israel and the ongoing Israeli violations against them, such as land theft practiced against them by different groups and government agencies, discrimination and home demolition.

He called for increased support to the popular nonviolent resistance against the Israeli violations in Jerusalem, and called on the Palestinian factions in the West Bank and Gaza to end their rifts and achieve unity.

“Can anybody imagine France without Paris”, he said, “To us, Jerusalem is not less important than Paris, yet Jerusalem has a religious significance not found in Paris”.