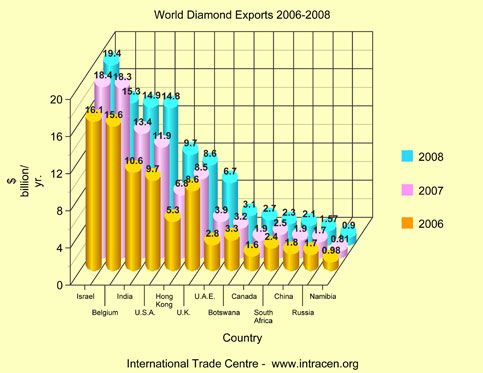 Every year, consumers the world over unwittingly spend billions of dollars on diamonds crafted in Israel, thereby helping to fund one of the world’s most protracted and contentious conflicts.

Most people are unaware that Israel is one of the world’s leading producers of cut and polished diamonds. As diamonds are normally not hallmarked, consumers cannot distinguish an Israeli diamond from one crafted in India, Belgium, South Africa or elsewhere.

The global diamond industry and aligned governments, including the EU, have hoodwinked consumers into believing the diamond trade has been cleansed of diamonds that fund human rights abuses, but the facts are startlingly different.

Israel — which stands accused of war crimes, crimes against humanity, ethnic cleansing, genocide, the crime of apartheid, extrajudicial executions within and outside the territory it controls and persistent serious breaches of the Geneva Conventions — is the world’s leading exporter of diamonds (see Figure 1 below).

Israeli companies import rough diamonds for cutting and polishing, adding significantly to their value, and export them globally via distribution hubs in Antwerp, London, Hong Kong, New York and Mumbai.

In July 2000, the global diamond industry set up the World Diamond Council (WDC). The WDC was established as a response to public outrage about the use of diamonds to fund bloody conflicts in western African countries and it includes representatives from the World Federation of Diamond Bourses and the International Diamond Manufacturers Association.

The council’s ultimate mandate is ‘the development, implementation and oversight of a tracking system for the export and import of rough diamonds to prevent the exploitation of diamonds for illicit purposes such as war and inhumane acts.’

Significantly, the WDC limits its concern about human rights violations to those
funded by rough diamonds only.

In 2003, the WDC introduced a system of self-regulation called the Kimberly Process Certification Scheme to stem the flow of ‘conflict’ or ‘blood diamonds.’

In keeping with the limited concerns of the WDC the UN-mandated Kimberly Process adopted a very narrow definition of what constitutes a conflict or blood diamond: ‘rough diamonds used by rebel movements or their allies to finance conflict aimed at undermining legitimate governments.’

As a result of this tight ring-fencing, the much more lucrative trade in cut and polished diamonds avoids the human rights strictures applying to rough diamonds, provided the industry uses only Kimberly Process-compliant rough diamonds.

Regardless of the human rights violations and atrocities funded by revenue from the Israeli diamond industry, governments and other vested interests party to the Kimberly Process facilitate the unrestricted access of diamonds crafted in Israel to the multi-billion dollar global diamond market.

The WDC created a web site called Diamondfacts.org to promote the virtues of the industry. It lists 24 facts extolling the benefits of the diamond industry — primarily to India and countries in Africa.

Some of the benefits include that an estimated 5 million people have access to appropriate healthcare globally thanks to revenues from diamonds; diamond revenues enable every child in Botswana to receive free education up to the age of 13; the revenue from diamonds is instrumental in the fight against the HIV/AIDS pandemic.

While these facts are laudable the list makes no mention of other less savory facts, including the fact that revenue from the diamond industry in Israel helps fund atrocities and human rights abuses such as the killing, maiming and terrorizing of thousands of innocent men, women and children in Palestine and Lebanon — the sort of atrocities the Kimberly Process is supposed to prevent being funded by revenue from diamonds.

The list of ‘Diamond Facts’ paints a one-sided, positive image of the industry. It implies that the greatest benefits are being felt in some of the poorest nations of the world.

But Israel, one of the wealthiest nations, towers over all other countries in terms of the net benefit derived from the diamond industry. The added value to the Israeli economy from the export of diamonds was nearly $10 billion in 2008 (see Figure 2 below).

The WDC website is equally selective when it comes to providing information about which countries are most dependent on diamonds. It explains that Namibia, one of the minor diamond exporting countries in monetary terms, derives 40 percent (<$1 billion) of its annual export earnings from diamonds and that 33 percent ($3 billion) of the GDP of Botswana, another minor player, is derived from diamond exports. The WDC fails to mention that the much more lucrative, high-value end of the diamond industry is the main artery of the Israeli economy, accounting for more than 30 percent of Israel’s total manufacturing exports worth nearly $20 billion in 2008 (‘Trade Performance HS: Exports of Israel’ accessed 25 March 2010) (See Figures 3 and 4). By comparison, the budget for Israel’s Ministry of Defense was $16 billion in 2008. Revenue from the diamond industry helps fund Israel’s illegal occupation of the Palestinian territories, its brutal subjugation of the Palestinian people and its international network of saboteurs, spies and assassins. None of this is alluded to in the WDC’s ‘Diamond Facts.’ Contrary to claims by the diamond industry and jewelers that all diamonds are now conflict free, they are not. Israel’s dominant position in the industry means that diamonds crafted in Israel are interspersed globally with diamonds crafted in other countries. Consumers who purchase diamonds that are not laser-inscribed to identify where they were crafted run a significant risk of purchasing a diamond crafted in Israel, thereby helping to fund gross human rights violations. The Kimberly Process Certification Scheme strictures only apply to rough diamonds, thus allowing diamonds crafted in Israel to freely enter the market regardless of the criminal actions of the Israeli government and armed forces. The Kimberly Process is seriously flawed and is being used by the diamond industry and jewelers to pull the wool over consumers’ eyes by telling them that all diamonds are now ‘conflict free’ without explaining the limitations and exactly what that means. All this is hardly surprising given Israel’s dominant position in the diamond industry. Israel currently chairs the Kimberly Process. The notion of self-regulation by any industry that is intrinsically linked to the violations it purports to want to eliminate is something that neither governments nor the general public should tolerate. It is impossible for the public to have confidence in the diamond industry’s attempt to self-regulate as long as it facilitates the trade in diamonds crafted in Israel, which, if the Kimberly Process applied the same standards to all diamonds, would rightly be classified as blood diamonds and treated accordingly. Given the failure of Western governments to hold Israel to account for numerous breaches of international law including international humanitarian law, breaches of the UN Charter, its failure to abide by more than 30 binding UN Security Council Resolutions, breaches of EU Agreements and disregard for the 2004 advisory opinion of the International Court of Justice, they are unlikely to insist that the diamond industry broaden the definition of a conflict diamond to include cut and polished Diamonds that fund human rights abuses. Consumers should have the right to know where a diamond was crafted and consequently the right to choose an Israel-free diamond. These rights are not available to consumers today. In 2005, Palestinian civil society called for an international campaign of boycott, divestment and sanctions (BDS) against Israel similar to that which helped bring an end to the apartheid regime in South Africa. The international BDS campaign has to date focused much of its boycott activities on the most easily targeted Israeli products including fruit, vegetable, cosmetics and some plastic products. Targeting these products helps to increase public awareness of Israeli crimes and to some extent satisfies the public’s desire to register disapproval of Israel’s actions. However, these products account for only a small fraction of Israel’s total manufacturing exports. Even if the boycott of these products was totally successful it would not make a significant difference to the Israeli economy or to Israel’s ability to further its expansionist goals. The diamond industry is a major pillar of the Israeli economy (see Figure 5 above). No other developed country is so heavily dependent on a single luxury commodity and the goodwill of individual consumers globally. Anything that threatens the carefully-nurtured image of diamonds as objects of desire, romance and purity could have serious consequences for the Israel diamond industry and the country’s ability to continue funding its illegal occupation of the Palestinian territories, the construction of illegal colonies and other associated criminal activities that render it the pariah of the modern age. The international BDS campaign needs to focus global attention on the diamond trade that facilitates Israel’s ongoing crimes against the Palestinian people and its neighbors in the region. —— Seán Clinton is the chairperson of the Limerick branch of the Ireland Palestine Solidarity Campaign and a former Boycott Officer on the National Committee of the Ireland Palestine Solidarity Campaign.