Erdogan: “Double Standards In Dealing With Iran and Israel Should Be Stopped” 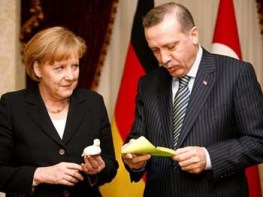 Turkish Prime Minister, Receb Tayyip Erdogan, slammed what he called the “double standards policy” in dealing with the Iranian Nuclear Program, and Israel’s Nuclear Agenda. His statements were made Monday during a press conference with the German Chancellor, Angela Merkel who is currently visiting Turkey for talks with its officials.

Erdogan said that Turkey rejects any further sanctions on Tran.

He stated that the International Community imposed sanctions twice on the Islamic Republic , and that the sanctions proved ineffective as the only way to deal with this issue is through diplomacy.

Erdogan also said that his country objects to Israel’s nuclear power and program.
“Israel has nuclear weapons”, he said, “Is anybody imposing sanctions on Israel? No?”.

“The only difference between Iran and other countries in the region, is that Iran is a member of the International Atomic Agency”, Erdogan stated.

Meanwhile, Merkel said that the United Nations should adopt further sanctions on Iran should it refrain from conducting “real measures in the near future”.