Settlers Attack a 89-year-old woman, her 50-year-old daughter in Jerusalem 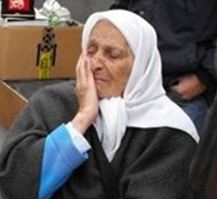 Israeli settlers attacked on Friday Rifqa Al Kurd, 89, and her daughter Nadia, 50, in Sheikh Jarrah neighborhood, in East Jerusalem, the Maan News Agency reported.The attack took place after nearly 200 residents and peace activists held a protest on Friday evening demanding an end to the provocative attacks and violations carried out by the settlers against the residents of East Jerusalem.

The Israeli police did not attempt to stop the settlers and asked the family of Nadia to file a complaint.

The attack against Rifqa and her daughter was caught on film, but the police did not arrest any of the assailants.

Residents of Sheikh Jarrah said that the police is conspiring with the settlers especially since several policemen joined the settlers in attacking the residents.