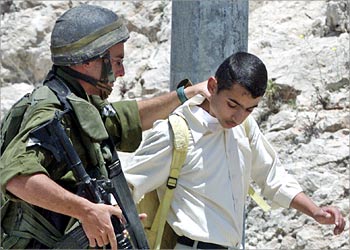 The Palestinian Center for Defending the Detainees (PCDD) issued a press release on Monday stating that Israel is holding captive nearly 340 Palestinian children, depriving them of their basic rights and subjecting them to ongoing violations. The center said that while the Palestinians mark the Palestinian Child day, detained children are still facing abuse and violations, including torture and solitary confinement in dark tiny cells.

The center added that detained children are also placed in small and overcrowded rooms, while Israeli courts are prosecuting them as adults and Israel’s Prison Administration deprives them from their visitation rights.

Israel sent more than 231 children to court, while more than 100 children are awaiting trial. Children are also subject to Administrative Detention without any charges or trial, an issue that violates the International Law and all international child protection agreements.

Similar to detained adults, child detainees are deprived from receiving their basic rights, such as clothing and the right to education.

There are 50 detained children who need essential medical care but are deprived from receiving it, and at least 10 children were given bad food that led to poisoning them, the center added.

The PCDD called on international human rights groups to intervene and ensure the unconditional release of all detained children, and to oblige Israel to respect the International Law.

Israel is holding captive more than 8000 detainees, 1600 of them, are sick, including 16 who have cancer and are not receiving the needed treatment.

550 detainees needs surgeries, 160 suffered heart diseases, kidney diseases and other serious health issues, 18 detainees are paralyzed, 80 have diabetes, two are blind, 40 were shot and wounded before their arrest and after arrest, and 41 are constantly hospitalized at the Al Ramlah prison hospital that lacks the basic medical equipment and supplies.