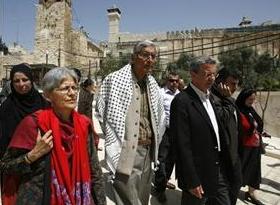 As Rajmohan Gandhi, the grandson of Indian human rights leader, Mahatma Gandhi, and his wife Usha visited Hebron city, in the southern part of the West Bank on Sunday, Israeli soldiers tried to obstruct the visit. Local sources in Hebron reported that as Gandhi and his wife, tried to visit an illegal settlement outpost installed near the Ibrahimi Mosque, Israeli soldiers tried to prevent them from crossing and installed additional roadblocks.

Israeli soldiers also detained a number of journalists and prevented them from reaching the areas.

After touring the Old City of Hebron, Gandhi stated that the Palestinian people must have their freedom and independence, and added that the electronic gates installed by Israel in front of the Ibrahimi Mosque are an insult to humanity.

He said that the Israeli violations in Hebron, the confiscation of homes and lands, and the constant attacks against the residents must be halted, and expressed his support to the Palestinian popular struggle for liberation and independence.

Gandhi further stated that the International Community must act and should be actively involved in ending the ongoing Israeli violations and attacks.