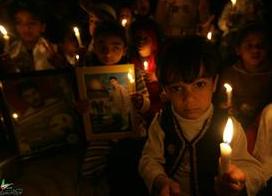 Hundreds of children marched on Monday evening towards the Unknown Soldier Square, west of Gaza City marking the Palestinian Child Day and lit candles demanding the release of their fathers imprisoned by Israel without any visitation rights.The procession was organized by the Popular Committee Against the Siege and the National Committee to Support the Detainees.

The children carried signs calling for the release of the detainees, and carried pictures of the detained fathers as some of them grew up without even being able to visit their imprisoned fathers due to the illegal Israeli restrictions, siege and measures.

Israeli is preventing some 775 detainees from having visitations since the illegal siege was imposed on Gaza in 2006.

Farah Al Ghoul, advisor of the Ministry of Detainees in Gaza, stated that Israel is still holding captive more than 330 children, an issue that comes in direct violation to the International Law and all international agreements of Children’s Rights.

Independent Legislator Jamal El Khodary of the Popular Committee Against the Siege demanded Israel to allow visitations to Gaza Strip detainees and to release all detained children without any delay of preconditions.

“Those children belong in their homes, schools and recreation centers”, he said, “their place is not behind bars and in holding cells facing ongoing violations”.

El Khodary further stated that the children are living in a big jail called the Gaza Strip, and are deprived from seeing their detained parents.

One of the international supporters who predicated in the event gave a speech during the procession and said that the children have the basic right to visit their detained parents, and have the right to live the same way other children live.

He added that the International Community is not doing what it should do to support the detainees and end the illegal Israeli violations against them.