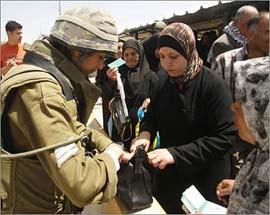 Palestinian medical sources reported Tuesday that a 63-year-old Palestinian-French man died Sunday at the Al Hamra roadblock, near the northern West Bank city of Jenin. Soldiers prevented him from crossing for several hours; he had diabetes and high blood pressure. The man, Abdul-Karim Oleyyat, came to Palestine to visit his village, Dir Abu Daeef, near Jenin. This was his first visit to the country since 1968.

While trying to leave the country, and as he was heading to Jordan, Israeli soldiers stopped him at the Al Hamra roadblock and detained him for several hours.

The soldiers claimed they needed to examine his foreign passport, and ignored his pleads to let him go as he needed to rest.

Oleyyat tried to tell the soldiers that he had high blood pressure, diabetes and other health conditions, but they kept holding and questioning him until her suffered a heart attack and died at the roadblock.

His brother-in-law, Abdul-Rahman Al Saady, who hosted him during his visit, told local reporters the French Consulate initiated an investigation into the issue.

Furthermore, an Israeli army spokesperson said that an investigation was initiated into the issue after an official complaint was filed.