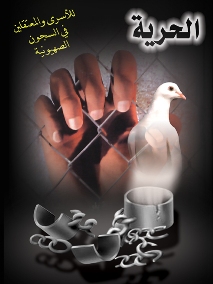 The detainees are demanding the army to stop the provocative acts and humiliation carried out their parents, especially since the soldiers were recently demanding the visiting parents to undergo naked body searches.

They are also demanding visitation rights to the detainees of the Gaza Strip who have not been able to see their families since more than four years.

Hundreds of detainees from the West Bank and detained Arab residents of Israel are also denied their visitation rights, while Israel also banned Al Jazeera satellite news agency, based in Qatar, and is preventing the entry of books in addition to barring hundreds of detained school students from completing their school education.

Ra’fat Hamdouna, head of the Detainees Media Center, said that this comprehensive strike is the first since several years, and that the detainees are urging the media and human rights groups to highlight their suffering and their legitimate demands.

Hamdouna added that the detainees aren’t wishing for suffering or hunger, but they are striking for their stolen freedom, their dignity and their legitimate rights.

Hamdouna called human rights groups and centers that deal with the detainees’ affairs to support the detainees and their struggle against the ongoing Israeli violations.