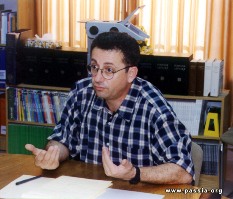 Palestinian Legislator, secretary-general of the Palestinian National Initiative, Dr. Mustafa Barghouthi, stated that nonviolent, popular resistance in Palestine is the most effective means of resistance against the Israeli apartheid regime.Dr. Barghouthi stated that nonviolent protests against the Annexation Wall, settlements and Israeli violations, especially the protest in Bil’in and Ni’lin villages, near the central West bank city of Ramallah, will continue despite an Israeli decision declaring the two villages closed military zones for the fourth consecutive week.

He stated that the Israeli violations and the kidnapping of peace activists will not be able to stop the nonviolent struggle against the occupation.

He saluted the Palestinians and international peace activists who counter the occupation, settlements and the wall in the occupied Palestinian territories.