Israel To Demolish 13 Homes in Lod 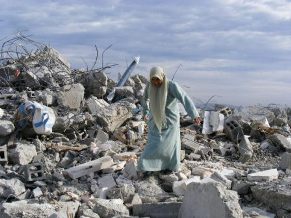 While Israel is demolishing Palestinian homes in occupied East Jerusalem and replacing the residents with Jewish settlers, the Israeli government decided to demolish 13 homes in Lod, near Tel Aviv.The families received official notices on Sunday and were informed that they must vacate their homes within two days.

Farida Sha’ban, an owner of one of the homes, told the Arabs48 news Website that Israel wants to remove the Arabs and Palestinians from the country, and that this violation is a continuation of the Nakba of 1948 when hundreds of thousands of Palestinians were forced out from their homes and lands before the creation of Israel in Palestine.

She voiced an appeal to political leaders and the Arab population to join the families in the protest tent in Lod.

She added that the Arabs will not leave their homes and will remain in their lands.

“On our dead bodies, we will never leave our homes and city”, she said, “my husband. Ali Sha’ban, and myself built this home and paid everything we own to provide housing and dignity for our children”.