JCESR:”New Israeli Decision, As Dangerous As the Nakba of 1948” 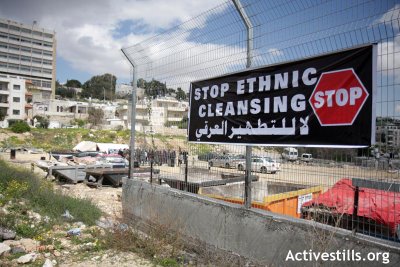 It said that this new “law” allows ordinary soldiers stationed at roadblocks and crossing points to have the power to regard those residents as “infiltrators” and thus have the power to imprison and prosecute them.

Thousands of families from Jerusalem are now living in the suburbs of the city, such as Abu Dis, Al Ezariyya (Bethany), Al Ram, Dahiat Al Barid, Bir Nibala and Um Al Sharayit, and could easily be deported.

Furthermore, hundreds of Palestinians families living in the West Bank, and even in East Jerusalem, carry American or European citizenships and this new law will have a direct impact on them and will lead to their deportation.

The center said that this military order is directly connected to Israel’s illegal attempts to grab the Palestinian “controlled area” and deport thousands of Palestinians as the occupation considers the Arabs and Palestinians, and their international spouses, as demographic threats.

This is happening while Israel is constructing and expanding Jewish settlements in the West Bank and in East Jerusalem. The issue will lead to a sharp increase in the numbers of Jewish settlers, as the number will reach half a million settlers, 200.000 of them living on Palestinian lands in Jerusalem.

The JCSER further stated that Israel recently issued several orders to annex Palestinian lands to construct the illegal Annexation Wall on them and to construct settlements while fundamentalist Jewish groups are calling for expelling the Palestinians out of the country.

Rabbi Ovadia Yusef, spiritual leader of the extremist Shas movement, stated during the Jewish Pessah that “Jerusalem should only inhibited by the people of Israel”, and that the “Wall ensures the sanctity of the city, only Jews should be living there, while the Messiah will come and burn the rest altogether”.

Furthermore, fundamentalist Jewish groups issued statements calling on all “non-Jews to leave the land of Israel”, and added that “it is written in the Torah that the small land of Israel is the land of the Jewish people, and others cannot and should not be living there permanently”.