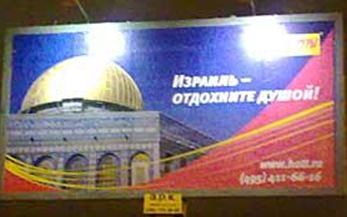 The Guardian stated that the British government prevented the Israeli tourism agency from continuing this campaign as it published pictures of Muslim holy sites presented as Jewish sites.

The BBC reported that due the fact that such advertisements misguide the public, and provide them with inaccurate information, the government decided to prevent them.

It is worth mentioning that a Russian tourism agency recently published an advertisement for trip to Jerusalem and printed huge posters showing the Al Aqsa Mosque as a Jewish holy site.

This is not the first time such ads are published in Britain and other western countries as several organizations, direct supporters of illegal settlement activities and fundamentalist groups, published similar ads presenting several Arab and Palestinian areas and sites as Jewish sites.

Such publications are also encouraged by consecutive Israeli government as the case with the current government of Benjamin Netanyahu and the so-called Jewish Heritage Trail approved recently by Netanyahu regarding the Al Aqsa Mosque in Jerusalem, the Ibrahimi Mosque in Hebron and the Bilal Mosque in Bethlehem as Jewish sites.