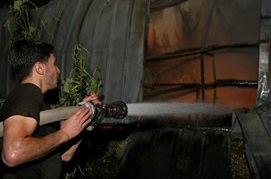 Palestinian sources reported on Thursday that after several storehouses for household and sponge products caught fire, the Israeli army obstructed Palestinian firefighters and rescue teams from reaching the area, causing even more damage and losses.
The storehouses, which belong to merchants Omar Fathi Amour and Khaled Al Nabulsy, are situated in Barta’a, a village surrounded by the Annexation Wall near the northern West Bank city of Jenin.

Majdi Qabha, head of the Barta’a Village Council, said that residents rushed to the scene and managed eventually to put the fire out. But as firefighters were not allowed through, the losses of an estimated 1 Million NIS were greater than need have been.

Qabha added that residents initially called Israeli firefighters as the station is close by, but the Israeli army prevented them from crossing into the Palestinian village.

Some time later, Palestinian firefighters who had been informed of the fire rushed to the scene and managed to control the it.