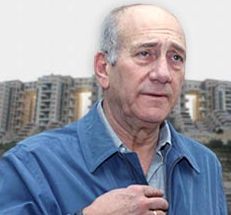 On Thursday, an Israeli court lifted a gagging order in the case of the“Holy Land” corruption scandal revealing that the main suspect in this case is Israel’s former Prime Minister, former Jerusalem Mayor, Ehud Olmert.Olmert will be investigated once again in the coming days on suspicion of accepting bribes and betraying public trust.

He is believed to have received bribes amounting to hundreds of thousands of Israeli Shekels when he was the mayor of Jerusalem in return for approving the
“Holy Land” residential construction plan for Jewish settlers of East Jerusalem.

The Police believe that several million shekels were paid to figures within the municipality who then approved the construction plan and overlooked administrative details.

They added that Olmert is suspected of receiving bribes on three occasions from an investor when he served as mayor and as a Minister of Trade and Industry.

When serving as a minister, it is alleged that he also received bribes to push through approval for construction in Keryat Shmone settlement and other projects near Tel Aviv and that he received checks from attorney Uri Maysor who has been in custody since last week. Maysor and Olmert are also suspected of involvement in several other corruption cases.

The Israeli police believe that Lupolianski is involved in the new corruption case known as “Holy Land” along with the former Israeli Prime Minister.

Lupolianski denies any involvement in corruption or bribery but it is believed he took money to change planning laws allowing the construction of the large, badly-designed, apartment blocks in Jerusalem to go ahead.