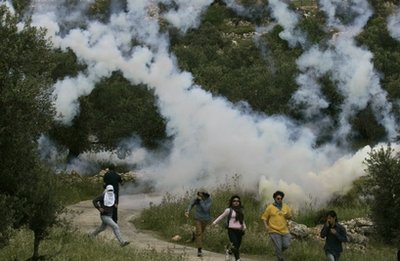 According to the Palestinian Center for Human Rights’ Weekly Report on Israeli Human Rights Violations in the Occupied Palestinian Territories, in the week 8-14th April 2010, 7 Palestinian civilians, including two children, were wounded by Israeli gunfire in the West Bank. Two Palestinian militants were killed and 3 others were wounded by Israeli forces in the Gaza Strip.Also this week, Israeli forces fired at Palestinian farmers and workers in border areas of the Gaza Strip and continued to use force against peaceful protests in the West Bank.

Israeli forces carried out 23 incursions into Palestinian communities in the West Bank, during which they abducted 35 civilians, including two children;12 of them, including, 5 internationals and two photojournalists, were abducted as peaceful demonstrations dispersed.

On Monday April 12th at around 08:30 am Israeli forces moved into ‘Azzoun village, east of Qalqilya. They surrounded the Yasser Arafat Elementary School in the west of the village. When the headmaster asked the soldiers the reason for the action, he was told they wanted to arrest a number of students for throwing stones at their vehicles. The headmaster refused to allow them into the classrooms but they stayed in the area. The headmaster was later able to let the students exit the school through a side gate without the troops noticing.

Israeli forces have continued to construct the Annexation Wall inside West Bank territory. During the reporting period, 7 Palestinian civilians, including two children, were wounded and 3 journalists sustained bruises when Israeli forces used excessive force against peaceful demonstration in protest against the theft of more land.

On Thursday April 8th, at approximately 23:15, Israeli forces moved into al-Ma’sara village, south of Bethlehem. They raided a two-storey house belonging to Mohammed and Hassan Ahmed Braijiya, activists in Popular Committee against Settlements and the Wall. Soldiers interrogated Hassan accusing him of incitement and warned him against organizing further protests.

Following Friday Prayers on April 9th, dozens of Palestinian civilians and international and Israeli human rights activists took part in a peaceful demonstration in protest of the construction of the Annexation Wall in Bil’iin village, west of Ramallah. The demonstrators moved approached the Wall and tried to reach village land cut off by the Wall. Immediately, Israeli troops fired rubber-coated metal bullets, sound bombs and tear gas canisters at them. As a result, dozens of demonstrators suffered tear gas inhalation and some sustained bruises. Israeli forces also abducted Haitham Jamal al-Khatib, 34, a photographer of B’Tselem and member of the Popular Committee against the Wall and Settlements, but he was later released.

Also following the Friday Prayer on 09 April 2010, dozens of Palestinian civilians and international and human rights defenders organized a peaceful demonstration in Ne’lin village, west of Ramallah, in protest of the construction of the Annexation Wall. They clashed with Israeli forces troops positioned near the Wall. Israeli forces troops fired rubber-coated metal bullets, sound bombs and tear gas canisters at demonstrators. Dozens of demonstrators suffered from tear gas inhalation, and other sustained bruises.

Also on Friday, dozens of Palestinian civilians together with international and Israeli human rights defenders organized a peaceful demonstration in Nabil Saleh village, northwest of Ramallah, in protest to land confiscation in Wad al-Raya area between the villages of Nabi Saleh and Deir Nizam. When the demonstrators attempted to reach areas of land seized by Israeli settlers near ‘Halmish’ settlement, Israeli troops fired rubber-coated metal bullets, sound bombs and tear gas canisters at them. As a result, 7 Palestinian civilians, including two children, were wounded by rubber-coated metal bullets. Dozens of demonstrators also suffered from tear gas inhalation, and other sustained bruises.

On Saturday morning, 10 April 2010, dozens of Palestinian civilians and number of international and Israeli human rights defenders and peace activists organized a peaceful demonstration in Beit Ummar and Safa village, north of Hebron, in protest to the construction of the Annexation Wall and settlement activities. They moved towards ‘Ein al-Baida area, 500 meters to the northeast, where Israeli forces plan to confiscate areas of Palestinian land. Israeli troops were intensively deployed in the area. They surrounded the demonstrators and declared Safa village a closed military zone. At approximately 14:00, Israeli troops fired tear gas canisters and sound bombs at the demonstrators. They also beat a number of demonstrators. According to investigations conducted by PCHR, Israeli forces abducted 11 civilians (6 Palestinian civilians, including a journalist, and 5 international solidarity activists). The Palestinian civilians who were abducted are:

In the Gaza Strip, on 13 April 2010, Israeli forces killed two members of the Palestinian resistance and wounded 3 others in armed clashes near the border between the Gaza Strip and Israel to the east of al-Boreij refugee camp.

In January, Israeli forces decided to close Nahal Ouz crossing permanently, and to allow the entry of fuels through Karm Abu Salem (Kerem Shalom) crossing, southeast of Rafah, claiming security reasons. 1.5 million people are being denied their basic rights, including freedom of movement, and their rights to appropriate living conditions, work, health and education.

On Thursday April 8th, at approximately 09:00, Israeli forces moved 400 meters into the east of al-Qarara village, northeast of Khan Yunis in the Gaza Strip. They leveled areas of land, which they had previously razed, along the border between the Gaza Strip and Israel. During this incursion, Israeli tanks opened fire indiscriminately. At approximately 15:00, a tank shell hit a house belonging to Hisham Mohammed Abu Farhana. The house and a neighboring house belonging to Abu Farhana’s brother were damaged. Israeli forces redeployed outside the area at approximately 21:00 of the same day.

On Monday April 12th, at approximately 22:10, Israeli troops stationed at the border between the Gaza Strip and Israel to the north of the Bedouin Village fired 4 flash bombs that landed on Palestinian houses in the village. No casualties or damages were reported.

On 10 April 2010, an Israeli settler threw a small steel object at the car of Khaled Hassan Sobeh, 50, member of the political bureau of the Palestinian People’s Party, when he was traveling from Nablus to Ramallah. The front window of the car was broken, but no injuries were reported.

On 13 April 2010, Israeli forces moved into Hares village, northwest of Salfit. They demolished a 130-square-meter, two-storey, house currently under construction and belonging to Maher Hassan Sultan, claiming that it was being built without a license. They also demolished a car wash facility belonging to Ghannam ‘Abed Daoud.

On 13 April 2010, at least 15 Israeli settlers from ‘Karmi Tsur’ settlement to the south of Beit Ummar village, north of Hebron, threatened Ahmed Khalil Abu Hashem, 42, and his family, when they were on their own land 70 meters from the aforementioned settlement. The settlers fired into the air, terrifying the family.

On 14 April 2010, Israeli forces moved into al-Khader village, southwest of Bethlehem. They demolished a 160-square-meter house belonging to ‘Ali Saleem Mousa, in which 8 people live. The house is located 150 meters from the Annexation Wall.

Also on 14 April 2010, Israeli settlers burnt 3 cars belonging to Palestinian civilians in Hawara village, south of Nablus. The settlers also spray-painted a Star of David onto the wall of a mosque in the village.