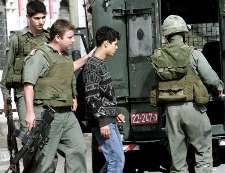 A Palestinian child, 15 years old, revealed to the Qatar-based, Al Jazeera, details on how Israeli soldiers kidnapped him, struck him and forced him to drink untreated sewage water at the entrance of Beit Ummar town, north of Hebron in the southern part of the West Bank.The child, Sabri Ibrahim Awad, told Al Jazeera that Israeli soldiers stopped him at the entrance of Beit Ummar and used him as a human shield during clashes with Palestinian youths.

The child was cuffed and forced to stand in front of military jeeps before he was moved to one of the jeeps where he was beaten by several soldiers.

He stated that he was heading to a festival in solidarity with Palestinian political prisoners detained by Israel.

Currently Sabri is suffering from bruises and sharp pain in his legs and face, with clear marks and bruises around his eyes.

Before he was released, soldiers threw him on the ground, hurled a gas bomb that fell near him, and drove away.

The Israeli army sealed Beit Ummar six days ago after closing all of its iron gates and placed concrete blocks on main roads leading to it.