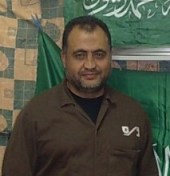 The Israeli Authorities released on Wednesday former Palestinian Minister of Detainees, Wasfi Qabha, who was arrested along with several Hamas ministers and elected officials last year. After his release, Qabha was welcomed at an army roadblock in the Hebron area by Palestinian Legislative Council head, Dr, Aziz Dweik, and several ministers and Hamas officials.

Dozens of legislators, ministers and Hamas officials were kidnapped by the Israeli army after the resistance in Gaza captured corporal Gilad Shalit in June 2006.

Speaking to the officials and residents who gathered to welcome him, Qabha stated that all detainees in Israeli prisons are sending a message of unity between all factions.

Meanwhile, Israeli deported to Gaza on Wednesday detainee Ahmad Sabah after ten years imprisonment. Sabah is from the northern West Bank city of Tulkarem and Israel insisted that he will not allowed to go to the West Bank upon his release.

Sabah refused to be deported to Gaza and installed a protest tent near the Erez terminal leading to Gaza.

The Hamas movement issued a press release slamming the Israeli illegal measures and deportation orders, and stated that Israel wants to deport the detainees and hundreds of families from the occupied West Bank in order to replace them with Jewish settlers.

It added that deporting Sabah to Gaza is part of an Israeli policy that aims at removing the Palestinians from the occupied west Bank.

Hamas described the policy as racist and demanded all factions to unite against the ongoing Israeli violations and aggression.

The movement voiced appealed to different human rights groups and legal institutions to intervene and stop the Israeli violations that target the Palestinians and their very existence in Palestine, including in occupied East Jerusalem.