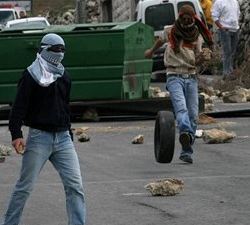 The settlers attacked several homes, and attacked residents who responded by hurling stones and empty bottles.

It is worth mentioning that similar clashes took place on Tuesday evening after undercover forces of the Israeli army kidnapped three youths near the protest tent installed in Al Bustan neighborhood.

An Israeli police source stated that two border policemen were wounded in the clashes.

Hatem Abdul-Qader, in charge of Jerusalem file at the Fateh movement, called for protests and prayers in the Al Bustan neighborhood on Friday.

He slammed the Israeli police for not granting the residents a license to hold their protest, while the police gives the settlers a free hand to protest and attack the residents and their property.

Meanwhile, fundamentalist Jewish settlers were granted a permit to hold a protest ion Silwan next Sunday.

The settlers are demanding the government to step-up the demolishing of Palestinian homes and to remove the Palestinians out of Silwan to replace them with Jewish settlers.

The police said that the settlers were granted a permit to hold their protest and that they would be “provided with police protection”.