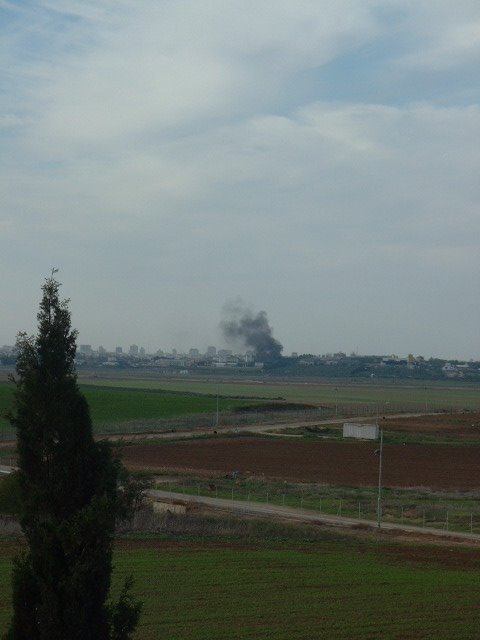 One international peace activist was shot in the leg, and five Palestinians wounded (one seriously) when Israeli troops fired live ammunition at a group of unarmed demonstrators in the northern Gaza Strip on Saturday.
The demonstrators were protesting the illegal confiscation of their land by Israeli forces for the creation of a ‘security buffer zone’ along the northern border between Gaza and Israel. They also said they were protesting the ongoing siege, and ongoing attacks against the residents and their property.

Palestinian medical sources reported Saturday that two residents and an international peace activist were wounded by Israeli military fire during the demonstration, which took place east of the Al Maghazi refugee camp in Central.”

The Israeli army claimed that soldiers opened fire at the protesters for “approaching the security fence”.

The protesters carried Palestinian flags, chanted against the illegal Israeli siege on the coastal region, and marched towards the so-called security fence.

Mahmoud Al Riziq, coordinator of the Popular Committee Against the ‘Security’ Belt, stated that the residents and their supporters held this protest after a call was made by the Committee, in order to express their rejection of the ‘buffer zone’ and the ongoing Israeli violations against the Palestinian residents in the Gaza Strip.

Al Riziq added that an international woman was wounded by a live round and that two young Palestinian men were also wounded.

Israeli forces have continually confiscated Palestinian land along the borders of Gaza for a so-called ‘security buffer zone’ – in Rafah camp, in southern Gaza, this included razing thousands of Palestinian homes in a crowded neighborhood so that Israeli and Egyptian troops could “have an open space” between the border and Palestinian built-up areas.

In northern Gaza, the land being confiscated is mostly farmland, but in the impoverished and besieged Gaza Strip, this farmland is both the only source of livelihood for its owners and the only source of food for those who subsist off its harvest.

Israeli officials say there must be 500 meters of ‘buffer zone’ controlled by Israeli occupying forces, even though this land confiscation and demolition of homes, barns and orchards is a direct violation of international law.