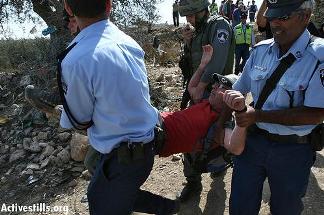 Israeli soldiers used excessive force against a nonviolent protest in the southern West Bank city of Hebron, and kidnapped Four residents. The protest was organized against the ongoing closure of the Al Shuhada Street in Hebron. Approximately 100 protestors, including a number of Israeli and international peace activists, gathered near illegal settlement outposts installed by Jewish settlers in Osama Bin Monqith School, dubbed by the settlers as “Beit Romano Outpost”, near one of the sealed entrances of the Al Shuhada Street in Hebron.

The protestors chanted for freedom, and demanded Israel to reopen the road so that the residents can move freely. They also demanded the evacuation of Jewish settlements and illegal outposts.

They managed to obstruct a weekly settlers protest, organized every Saturday in the Palestinian neighborhoods in the Old City of Hebron, and forced the settlers to retreat.

Meanwhile, Israeli soldiers and the so-called Border Police units violently attacked the nonviolent protest and kidnapped four residents, including Issa Ismail, a 30-year-old well-known human rights activists, and Professor Emanuel Fardi, a Jewish member of the Taayush – Arab Jewish Partnership Movement, in addition
to Jonathan Pollack of the Anarchists Against the Wall.

Hisham Sharabaty, an activist of the Youths Against Settlements, stated that this
protest is part of an international campaign demanding Israel to reopen the Al Shuhada Street and to stop restricting the freedom of movement of the Palestinians in their city.

Al Sharabaty added that what Israel is doing is one of the worst examples of apartheid as only Jewish settlers are allowed to use some roads in the Palestinian city, an issue that aims at forcing the residents out of their city especially since Israel shut down more than 500 Palestinian stores and shops, and installed more than 100 roadblocks.

There are nearly 600 Jewish settlers living in several illegal settlements and settlement outposts, including in homes illegally taken away from the residents, in Hebron. More than 170.000 Palestinians living in the city.