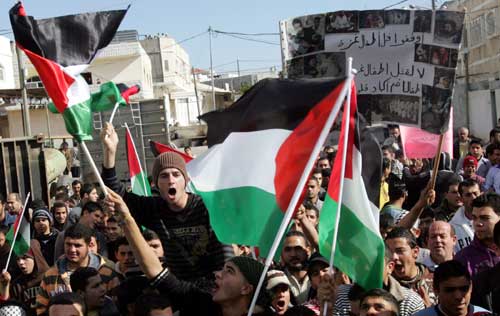 In commemoration of the anniversary of the Nakba, and as an expression of our commitment to resisting Israeli occupation, colonization and apartheid in accordance with international law, we (Palestinian youth organizations signed below) declare our rejection of normalization with the Israel on all levels.

Economic, political, cultural and institutional normalization legitimize Israel‚Äôs oppression of the Palestinian people by giving the appearance of normalcy to the relationship between oppressor and oppressed. This relationship is hardly one between equals as Israel continues to violate our inalienable rights, steal our land, and prevent refugees from our right of return in contravention of international law and numerous UN resolutions.

In commemoration of the anniversary of the Nakba, we the undersigned Palestinian youth:

Assert our right to resist Israel‚Äôs oppression of the Palestinian people through all forms of resistance and in accordance to international law, including forms of civil resistance such as demonstrations, sits-ins and, boycotts of Israel.

Adopt the definition of normalization issued by the Palestinian Campaign for the Academic and Cultural Boycott of Israel (PACBI), and endorsed by the Boycott, Divestment and Sanctions National Committee (BNC) [1].

Refuse to take part in whitewashing Israel‚Äôs public image and therefore reject any Israeli-Palestinian meetings that do not recognize our inalienable rights, and explicitly aim to resist Israel‚Äôs occupation, colonization and apartheid. Israeli-Palestinian meetings that are not committed to such principles give a false picture of equality between the two parties by ignoring and legitimizing Israel‚Äôs oppression of the Palestinian people. We will not contribute to any event that undermines our rights, or portrays Israel as anything but what it really is: an apartheid state.

Reject the efforts of Israel and its apologists around the world, who aim to direct our efforts at convincing Israel of our inalienable rights rather than resisting its oppression through legitimate and legal means to obtain them; especially organizations that aim to convince us that that conflict is but a symptom of psychological barriers that can disappear through dialogue with the other. Such organizations they completely ignore the reality which is Israel‚Äôs oppression and systematic discrimination against the Palestinian people. Organizations like Seeds of Peace, One Voice, NIR School, IPCRI, Panorama, and others specifically target Palestinian youth to engage them in dialog with Israelis without recognizing the inalienable rights of Palestinians, or aiming to end Israel‚Äôs occupation, colonization, and apartheid.

Endorse the letter issued by our colleagues in Gaza in May 2009 and reiterate their call on students and youth around the world to boycott Israeli academic and cultural institutions and to divest from companies complicit in Israel‚Äôs oppression [2]. This includes the boycott of all institutions complicit in normalization activities by refusing to host them in any student or youth forums and events.

Categorically reject the exploitation of our name by normalizing organizations and state that they do not represent Palestinian youth in any way. We hereby declare that we will begin our struggle against all normalization projects in our academic and cultural institutions. We do so in order to put an end to the exploitation of our name by such projects and in order to assert our inalienable rights as inalienable.

We call upon all Palestinian youth in occupied Palestine and in the Diaspora, as well as those youth around the world who stand in solidarity with our just cause, to endorse our statement and actively work towards isolating all projects and activities that normalize and legitimize Israel‚Äôs occupation and colonization of, and apartheid policies towards, the Palestinian people.

[1] The full definition of normalization, in Arabic, can be viewed on the following link: http://pacbi.org/etemplate.php?id=1021. The definition of normalization, in brief, is ‚Äúparticipating in any project, initiative or activity whether locally or internationally, that is designed to bring together-whether directly or indirectly- Palestinian and/or Arab youth with Israelis (whether individuals or institutions) and is not explicitly designed to resist or expose the occupation and all forms of discrimination and oppression inflicted upon the Palestinian people.‚ÄĚ
[2] http://pacbi.org/etemplate.php?id=1021