Abu Zuhri: “Egypt Responsible For The Death Of Four, Gassed In Tunnel” 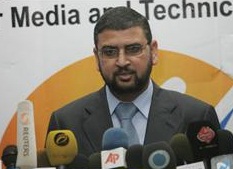 Dr. Sami Abu Zuhri, media spokesperson of the Hamas movement, held the Egyptian Authorities responsible for the death of four Palestinians who died in a tunnel after Egypt’s Border Police gassed it. Abu Zuhri demanded Egypt to conduct an immediate probe into the issue, and to prosecute those in charge.

Speaking at a press conference in Gaza, Abu Zuhri said that Hamas is following the developments, and strongly denounced Egypt for using gas against the residents.

Besides the four who were gassed to death, two residents are currently in serious conditions.

The Hamas spokesperson said that the Palestinians need the tunnels, and resorted to them due to the urgent necessity due to the ongoing siege on the Gaza Strip.

Abu Zuhri demanded the Arab League to act immediately and end the siege.