US: “Jerusalem Issue To Be Discussed At Final Stage Of Negotiations” 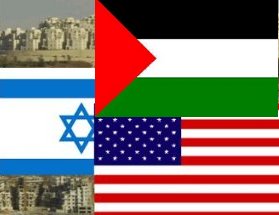 As indirect Palestinian-Israeli talks are to start Wednesday, advisor to U.S. President, Barack Obama, stated that the issue of Jerusalem would be discussed during the final stages of negotiations. David Excelrod said that Obama agreed to this issue and told a group of Jewish reporters on Tuesday at night that he agreed to postpone Jerusalem talks until the final stages of talks.

Excelrod added that other issues would be discussed at initial stages mainly security arrangements, water and borders as the U.S. administration fears that the issue of Jerusalem could jeopardize the talks before their start.

Israeli Yedioth Aharonoth reported that the American stance is coherent with Israel’s demands especially since Israeli Prime Minister, Benjamin Netanyahu, stated that the first issue to be discussed with the Palestinians is security arrangements then the issue of water followed by the issue of borders.

The two main complicated issues, Jerusalem and the Right of Return of the Palestinian refugees, would not be touched until the final stages of talks.

Several Israeli officials and senior political analysts stated that the “crisis” between the United States and Israel had completely vanished.