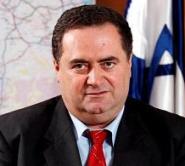 Israeli Transportation Minister, Yisrael Katz, stated that a full pace of settlement construction and expansion in the occupied West Bank will resume directly after the temporary settlement freeze ends on September 1.Katz added that settlement freeze is not a solution and that “the Jews will inhibit Israel eternity”. He also said that “under a peace deal, it would be unreasonable to evacuate settlements”.

His statements came during a visit to an illegal Jewish settlement in the occupied West Bank on Tuesday.

He presented a plan to create a link between all settlements, the plan includes a railway in the occupied West Bank and this planed railway would be connect with other railways in Israel.

Katz stated that several companied in the United States, China, and Italy showed interest in participating in this project.

The railroad, dubbed would link settlements in the Jordan Valley with Sheikh Hussein Bridge, Al Affoula, Haifa and Jerusalem railways.

The Israeli minister further states that it is essential to construct road number 505 which will link Tel Aviv with the Jordan Valley, and considered this line as of a great strategic significance.

“This road is important to us, it will serve us in war and peace”, he said, “In war time, tanks can use it, but I wish for peace, and I hope Palestinians and Israelis can use it”.