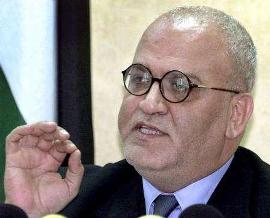 Chief Palestinian Negotiator, Dr. Saeb Erekat, stated Monday that President Mahmoud Abbas and U.S Middle East Envoy, George Mitchell, will meet this coming Wednesday instead of Tuesday, as had previously been declared, and intend hold talks on the issues of borders and security.Dr. Erekat said that the talks would focus on borders and security in an attempt to advance those issues in order to set the boundaries of the two-state solution.

Speaking to the French Press Agency, Erekat said that proximity talks, mediated by the United States, include talks on borders, the refugee crisis, those in detention, Jerusalem and water, and that such issues must be resolved in accordance to the International Law to end the Israeli occupation.

Responding to statements made by Israeli officials regarding continued settlement construction in occupied East Jerusalem, Erekat said that Israel’s actions with regards to home demolition, settlements and all illegal activities are considered a message from Israel against any chances of successful peace talks.

He added that Israel has obligations and commitments that should be implemented and respected.

Meanwhile, U.S president, Barack Obama, phoned president Abbas last Tuesday and told him that the Palestinians and the Israelis must refrain from any “provocative measures”.

Mitchell’s visit to the region is the first since proximity talks were launched on May 9. He will be holding meetings with Israeli officials before heading to Ramallah to hold a meeting with Abbas.

The government of Benjamin Netanyahu insists on constructing and expanding settlements, especially in occupied East Jerusalem as it considers Jerusalem as Israel’s eternal capital and not part of any talks.