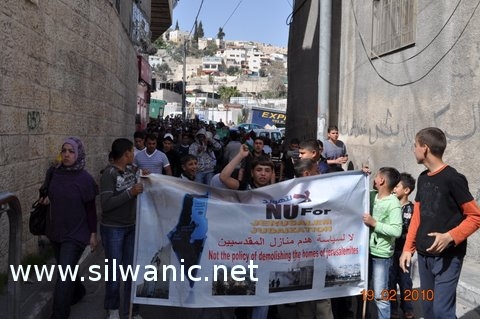 The Israeli government is planning to demolish and evacuate dozens of Palestinian homes and buildings in the Silwan and al-Bustan neighborhoods in occupied East Jerusalem. The plans were presented to the Israeli government and its legal counselor in preparation to present them to the “Planning and Construction” Committee in Jerusalem.Attorney Qais Nasser, stated that the first plan targets al-Bustan neighborhood, as Israel is planning to transform it into a “green and archeological site” intended to attract tourists. The neighborhood includes 88 Palestinian buildings that the Jerusalem Municipality issued demolition or evacuation orders against them.

The second plan aims at demolishing the twenty Palestinian residential buildings in order to confiscate the lands and use them as “public spaces”.

The home owners are forced to decide whether the demolitions progress under the supervision of the Israeli state, leading to the inflated costs being charged to the home owner, or demolish their buildings themselves.

Settlements and the continued Israeli occupation of Jerusalem and the rest of Palestine are illegal and violate the International Law.