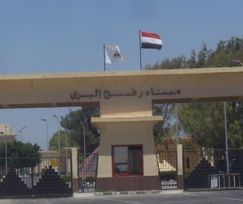 The Qatar-based al-Jazeera reported that the Egyptian Security Services arrested 16 members of Islamic Jihad at the Rafah Terminal, while heading back to the Gaza Strip after receiving medical treatment in Syria. A senior Islamic Jihad official told al-Jazeera that the Egyptian authorities moved the detainees to a security prison, and added that he fears they would be tortured the same way Egypt previously tortured six members of the Islamic Jihad, releasing them after 42 days of detention.

He stated that there are more than 31 Islamic Jihad members detained by Egypt, among them a number of wounded Palestinians.

Egypt is also holding captive several Palestinian fighters, including Ayman Nofal, a senior leader of the al-Qassam Brigades, the armed wing of the Hamas movement.

During a recent interview with al-Jazeera, Ramadan Shallah, secretary-general of the Islamic Jihad, accused Egypt’s security services of arresting and torturing Palestinian fighters and residents who were wounded during the Israeli war on Gaza.

Nafith Azzam member of the Political Bureau of the Islamic Jihad, said that his movement is interested in strengthening its relation with Egypt and added that he is sure the current situation will end.

In October of 2009, Yousef Abu Zuhri, the brother of Hamas’ Spokesperson, Sami Abu Zuhri, died in an Egyptian prison. Hamas said that Yousef was tortured to death and the family of Abu Zuhri filed a lawsuit against Egypt.