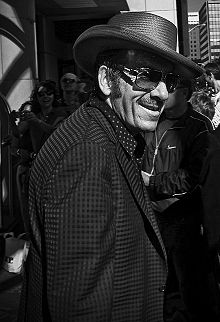 After a campaign to boycott Israel targeted singer Elvis Costello with calls, letters and faxes, he decided that he could not, in good conscience, continue with a planned tour in Israel. He decided to join the boycott of Israel even though he acknowledged that this would cost him any future invitations to Israel.The 70s-era rock musician cited Israel’s ‘despicable acts of violence perpetrated in the name of liberation” as part of the reason behind the cancellation of his tour.

The Palestine Solidarity Campaign immediately issued a statement praising the decision to cancel the tour, and said that Costello is part of a growing movement of artists and musicians who have chosen to support a boycott of Israel called for by hundreds of Palestinian organizations and leaders.

The boycott campaign aims to isolate Israel economically and politically, in an effort to push Israel to re-examine its policies of discrimination against non-Jews, and its violent occupation and expulsion of the indigenous Palestinian population from their homeland.

One representative of the Palestine Solidarity Campaign called Costello’s decision a ‘ clear stand for peace and justice.’

The Irish-descended London-born artist said that he could not, in good conscience, continue with a tour that he said would implicitly endorse the ‘suffering of the innocent.” He said that hee could no longer continue to “look the other way.’

Costello joins hundreds of musicians and artists that have recently cancelled tours and concerts in Israel, including hip-hop legend Gil Scott Heron.