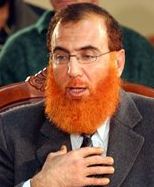 The Israeli Police decided, Thursday, to expel Palestinian Legislator, Mohammad Abu Teir, from occupied East Jerusalem and claimed that he lost his residency right in the city after he decided to run for the Palestinian Legislative Elections in 2006.Abu Teir is an elected legislator of the Hamas movement. He was informed that he has until June 19 to implement the order and leave the city.

Abu Teir was handed the order at the al-Maskobiyya police station in Jerusalem, and as he was leaving the station, a number of fundamentalist settlers of the Eretz Yisrael Shelano (Our Land Israel) fundamentalist group, tried to attack him and shouted “terrorist” at him and that “he would have been hanged in a normal country”.

He was imprisoned by Israel for 43 months and was approached by police only a few hours after he was released.

Abu Teir was interrogated at the al-Maskobiyya before he was handed the illegal order.

The Hamas movement and its government in Gaza said that Israel is pushing the area towards further escalation by targeting and expelling the Palestinians in Jerusalem and their elected leaders.