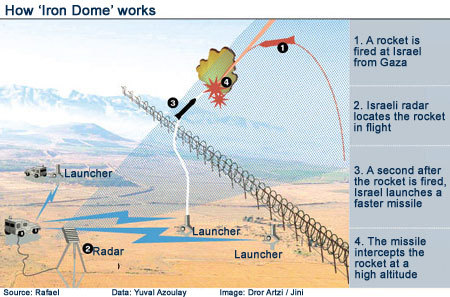 The United States Senate approved the American President’s plan to grant Israel more than $200 Million meant for the development of Israel’s Iron Dome that intercepts short-range missiles.The plan was approved by 411 senators while eight abstained.

Head of Foreign Affairs Committee at the senate, Howard Berman, said that the “Iranian Nuclear threat and the threats of Hamas and Hezbollah push the United States to provide more support to Israel”.

Meanwhile, Minister Moshe Yaalon of the Likud Party in Israel said that the government is going to resume its settlement activities directly after the ten-month settlement freeze is over.

Israeli Minister of Trade and Industry, Benjamin Ben-Eliezer, slammed the Palestinian Authority for the boycott campaign against settlement products and considered the campaign as “a mean method to boycott Israel”.

He called on the Palestinians to void their boycott campaign in light of the resumption of proximity talks, and added that a large number of Palestinians work in Jewish settlements.

Dalia Itzik of the Kadima opposition party, also slammed the boycott and described the decision as “foolish” as that the this boycott harms Palestinians who work in settlements.

Israeli Prime Minister, Benjamin Netanyahu, stated during a Thursday morning meeting with the U.S Middle East envoy, George Mitchell, that the Palestinians must stop what he described ‘incitement’ conducted by educational facilities and mosques who called for boycotting Israel.