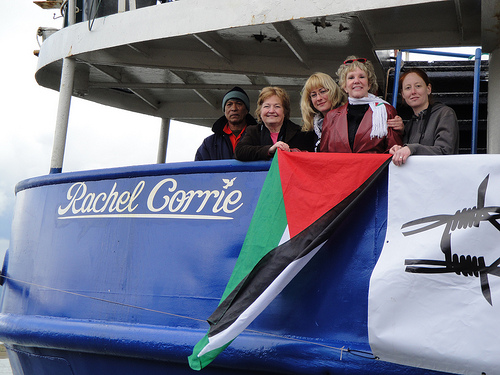 Israeli sources reported that two Israeli boats will be sailing Saturday from northern Israel in order to counter the Freedom Flotilla bringing 600 peace activists and humanitarian aid to the besieged Gaza Strip. Israeli Yedioth Aharonoth reported that the two Israeli vessels will sail waving banner labeling Hamas as a barbaric groups and countering Turkey’s involvement in the solidarity ships “by highlighting its role in the Armenian genocide”.

The Israeli paper said that the Israelis will sail to counter the solidarity convoy and to confuse it.

Furthermore, Israel decide to declare the area of Ashdod Port as a closed military zone in order to prevent the Freedom Flotilla from weighing anchor, the Maan News Agency reported.

On Saturday, the Rachel Corrie Ship sailed towards Cyprus and will be joining three solidarity ships from Turkey and five from Greece and will all sail to Gaza.

The solidarity boats are expected to reach the Gaza shore on May 27.

The Israeli ships, countering the Freedom Flotilla, will be sailing on Saturday with the aim to obstruct and confuse the peace activists.

Hundreds of yachts are planning to sail Saturday in an attempt to “confuse, intercept and stop” the Freedom Flotilla and the International peace activists. They will be sailing from the coast of Herzliya.

The Israel Navy intends to declare the coast as a closed military zone in order to prevent the peace activists from reaching the Gaza coast.

London – 14 May 2010 – At 22:45 local time tonight, the MV Rachel Corrie, a 1200-ton cargo ship, part of the eight-vessel Freedom Flotilla, set sail from Ireland on its way to the Mediterranean Sea. There, ships from Turkey and Greece will join her, then sail to Gaza.

This past week reports from Israel have indicated that the Israeli authorities will not allow the Freedom Flotilla to reach Gaza with its cargo of much-needed reconstruction material, medical equipment, and school supplies. According to Israeli news sources, clear orders have been issued to prevent the ships from reaching Gaza, even if this necessitates military violence.

The Free Gaza Movement, which has launched eight other sea missions to Gaza, confirms that Israel has tried these kinds of threats and intimidation tactics before in order to try to stop the missions before they start. “They have not deterred us before and will not deter us now,” said one of the organizers.

Ship to Gaza — Sweden, a Freedom Flotilla coalition partner, together with parliamentarian Mehmet Kaplan (Green Party) yesterday asked for an audience with the Minister of Foreign Affairs of Sweden, Carl Bildt, to discuss what measures the Swedish government and the European Union will take to protect the Freedom Flotilla’s peaceful, humanitarian voyage.

Earlier this week during a meeting with the European Campaign to End the Siege on Gaza – another coalition partner, Turkish Prime Minister Tayyib Erdogan expressed his support for “breaking the oppressive siege on the Gaza Strip…which is at the top of Turkey’s list of priorities.“

Coalition partners, Ship to Gaza – Greece and the Turkish relief organization IHH, stressed that the ships, passengers, and cargo will be checked at each port of departure, making it clear that we constitute no security threat to Israel.
Israel’s threats to attack unarmed civilians aboard vessels carrying reconstruction aid are outrageous and indicative of the cruel and violent nature of Israel’s policies towards Gaza.

The Freedom Flotilla is acting in line with universal principals of human rights and justice in defying a blockade identified as illegal by the UN and other humanitarian organizations.

Palestinians in Gaza have a right to the thousands of basic supplies that Israel bans from entering, including cement and schoolbooks, as well as a right to access the outside world. The Freedom Flotilla coalition calls on all signatories to the Fourth Geneva Conventions to pressure Israel to adhere to its obligations under international humanitarian law, to end the lethal blockade on Gaza, and to refrain from attacking this peaceful convoy.