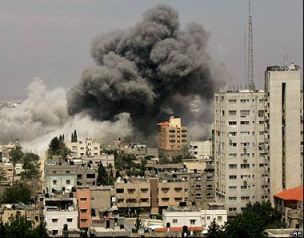 Palestinian sources reported that the Israeli Air Force carried out several airstrikes on Thursday night, after midnight, targeting a number of areas in the Gaza Strip. No injuries were reported. One of the attacks targeted al-Faraheen area in Khan Younis, in the southern part of the Gaza Strip. The explosions set several farmlands ablaze.

Also, the Israeli Air Force fired several missiles at a location believed to be used as a training base for the fighters of the al-Qassam Brigades, the armed wing of Hamas in Beit Hanoun, in the northern part of the Gaza Strip. Damage was reported, but no injuries.

The Israeli army claimed that the attack took place after Palestinian fighters fired a missile at the Western Negev at midnight, no damage or injuries were reported.

It is worth mentioning that the United States’ Senate approved the plan of President Barack Obama, to finance the development of Israel’s “Iron Dome” system which is meant to intercept shells fired from the Gaza Strip.

The Senate approved a $200 Million USD for the development of the Iron Dome. 411 senators voted for the plan and eight abstained.