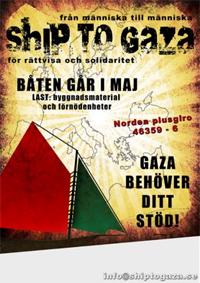 The Turkish government officially demanded that Israel not intercept or obstruct the Freedom Flotilla, a convoy of ships attempting to bring humanitarian supplies to the Gaza Strip. Turkey is requesting that Israel stop its threats against the Flotilla and the activists on board. Turkey is one of the nations most involved with the Freedom Flotilla. The government in Istanbul has demanded that Israel lift its illegal siege on Gaza.

Turkish Foreign Minister Ahmet Davutoğlu stated during a press conference after a UN meeting that his government is in constant talks with Israel regarding the Flotilla.

He added that Israel must act in order to decrease tension, and lift the siege on Gaza.

Davutoğlu said that he believes Israel will use its “wisdom” in dealing with the situation in Gaza and the humanitarian flotilla on its way there.

He added that urgent aid must reach Gaza, and that the countries participating in the Flotilla must act to to ensure that aid makes its way to the Gazan coast.