At Least 16 Wounded in Israeli Airstrikes In Gaza 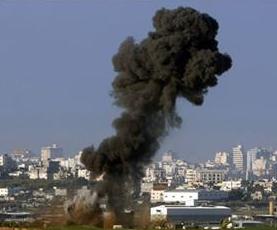 Palestinian medical sources in the Gaza Strip reported Wednesday morning that at least Gaza sixteen residents, mostly women and children, were wounded in a series of Israeli airstrikes over northern and southern Gaza. The strikes targeted homes and several facilities, including the former headquarters of the Civil Defense at the Gaza International Airport in the southern Gazan city of Rafah.

Eyewitnesses reported that Israeli F-16 jets fired two missiles at a training base used by the Al Qassam Brigades, the armed wing of Hamas. The base is in Beit Hanoun, in the northern portion of the Gaza Strip.

The Emergency Unit at the Military Medical Services in the Gaza Strip reported that fifteen residents suffered mild injuries in Beit Hanoun.

The Unit has condemned the shelling and says that it targeted civilian areas in direct violation of International Law.