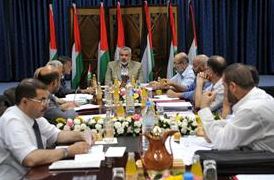 The Gazan government said that talks with Israel have no legitimacy and that “those holding the talks are illegitimate and do not represent the Palestinian people.”

The dissolved government went on to attack Israel’s claim that Al Qaida is operating in Gaza, dismissing it as a pretense for escalation.

It mentioned that the Ministry of Interior in Gaza and its security forces managed to arrest vandals who burnt the UNRWA Gaza shore summer camp, adding that the government will not allow any person to violate the law.

Referring to the Palestinian detainees imprisoned by Israel, the government called on international human rights groups to intervene and stop the Israeli violations against the detainees and their families, and called for the detainees’ release.

The Gaza government saluted the Freedom Flotilla heading to Gaza to deliver humanitarian and medical supplies and stated that such solidarity ships play an essential role in breaking the Israeli siege.