Ten, Including A Pregnant Woman, Wounded In Jerusalem 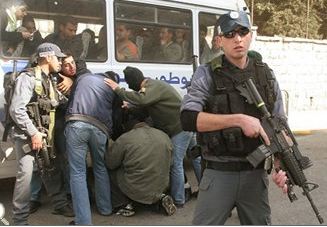 Palestinian medical sources reported that ten residents, including a pregnant women, were wounded on Thursday at night by Israeli army fire during clashes that took place in Silwan town, near Jerusalem.Resident Riham Al Rajabi, was beaten by Israeli policemen who ignored the fact that she is pregnant, she was moved to Al Maqassed Hospital in East Jerusalem.

Another women, in her fifties, was hospitalized after inhaling gas fired by the army.

The clashes took place after fundamentalist settlers conducted provocative acts in Arab neighborhoods, and the Israeli police arrived at the scene and sided with the settlers.