Under Israeli Threats, Freedom Flotilla Prepares To Sail To Gaza 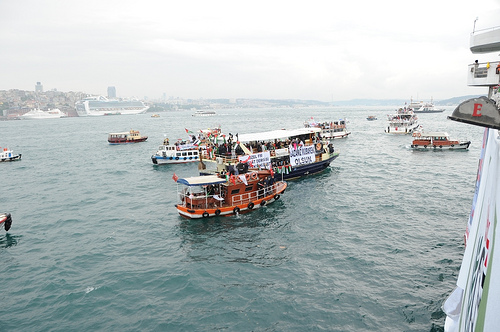 The Freedom Flotilla started gathering in international waters near the coast in Cyprus in preparation to sail to the Gaza Strip while Israel continued its threats to intercept and even attack the flotilla and arrest the participants should they decide to reach the Gaza coast. Meanwhile, the authorities in Cyprus prevented a Greek ship from reaching the coast of Turkey to pick up 14 European parliamentarians and three public figures, including Swedish author, Michael Hannan.

Al Jazeera reporter, on board the Greek ship, said that the authorities in Cyprus prevented the parliamentarians from reaching the ship to board it, but the activists and the figures on board are determined to wait for them before they sail.

All ships were supposed to meet on Friday in order to sail together on Saturday, but it is likely that that the delay would push the ships to sail to Gaza Sunday.

The organizers of the ships expressed disappointed and stated that there was an agreement that the parliamentarians arrive in Cyprus as it is the closest point to Gaza, and added that Israel practiced pressures on Cyprus in order to void this agreement.

On Friday at night, Cyprus officially informed Israel that it will not allow the European parliamentarians ships from sailing.

The legislators arrived in Cyprus several days ago, and were supposed to sail to the European ship to board it in an area far away from the port in Cyprus, but the authorities in Greece are trying to prevent them from leaving.

Should the legislators be forced to go to Cyprus-Turkey, the ships will be delayed for at least 12 hours, unless they decide to sail without them.

All ships were supposed to meet together by 4 P.M Cyprus time before heading to the Gaza Strip.

He thanked Turkey and its role in breaking and challenging the illegal Israeli siege on Gaza, and saluted all activists and organizations participating in the Freedom Flotilla and supporting it.

Hundreds of Arab and International activists, including ten Algerian legislators, are determined to reach Gaza and deliver the humanitarian supplies, including medicine, wheelchairs and school supplies.

They said that there are determined to resist any Israeli attempt to force them away from the Gaza coast.

The Freedom Flotilla includes eight ships; one of them carried the name “8000” referring to the number of Palestinian detainees imprisoned by Israel. The ships are also carrying more than 10.000 Tons of medical supplies, wood and construction materials, and 100 mobile homes.

Israel said that it will not allow the ships to reach Gaza, and installed tents in Esdod “Ashdod” Port to confine the activist in them after boarding their ships.

The Israeli Authorities declared Gaza coast a closed military zone and said that the activists will be arrested and deported and will not be allowed back in the region.

The Al Jazeera reported that the Israeli decision, illegal in nature and violates the International Law, is only meant to serve Israel’s political, security and media interests.