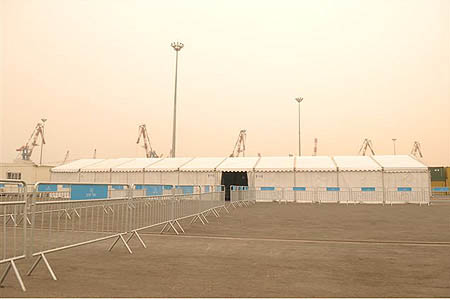 The Israeli army and navy, under direct supervision and orders from the Israeli government, prepared a plan dubbed “Operation Sky Wind” to attack the Freedom Flotilla” heading to Gaza and kidnap and the activists onboard. Israeli sources reported that the navy had concluded all preparations to takeover the Freedom Flotilla, by force in needed, in an attempt to prevent it from reaching the Gaza coast to break the four-year long ongoing siege.

1. Warning stage; the navy will try to stop the ships from reaching a “line” dubbed
as a red line, should the ships reach the designated line, they will be warned and informed that they “violate the law”.

2. Boarding and controlling the ships; should the ships fail to adhere to the demands of the navy, the navy will attack and control the eight ships carrying nearly 800 activists. The ships will then be taken to Ashdod Port and the activists will be detained in a huge tent installed for this purpose.

3. Deportation by air; Israeli soldiers and policemen would order the detained activists to sign statements accepting to be deported to their countries, and will be deported by air via the Ben Gurion Airport.

4. Arrest before deportation; those who refuse to sign deportation statements, will be arrested, sent to medical examination, then transferred to the Nahshon Brigade which belongs to the Israeli Prison Administration before being sent to Be’er Sheva Prison and likely other prisons.

They will be prosecuted and deported at a later stage.

Some 600 human rights activists boarding the eight solidarity ships heading to Gaza said that they are determined to reach Gaza regardless of Israel’s threats.
Greta Berlin, spokesperson of the Free Gaza Movement, stated that “nothing is going to stop the ships”, and that the human rights activists are determined to break the illegal Israeli siege on 1.5 million Palestinian in Gaza, and deliver the humanitarian supplies.