Haniyya: “We Will Accept Any Referendum That Includes All Palestinians” 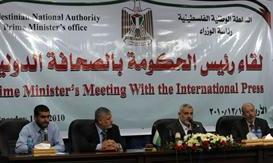 During a meeting with international reporters working in the Gaza Strip, Prime Minister of the dissolved government in Gaza, Ismail Haniyya, stated that his government will accept the results of a public referendum on a peace deal with Israel as long as this referendum includes all Palestinians in the West Bank, the Gaza Strip and in exile.Haniyya added that Hamas would accept a state in the 1967 borders, with Jerusalem as its capital, as long as the Palestinians decide on the issue through a comprehensive referendum even if this referendum contradicts the beliefs and principles of the movement.

He also stated that a peace agreement must include an acceptable solution to refugee’s issue.

Haniyya further stated that the agenda of his government is the agenda of national unity, and the unity deal that was signed by all factions.

The Hamas leader said that Hamas does not object to a sovereign Palestinian state in the 1967 with Jerusalem as its capital, adding that all Palestinian detainees must be released, reforms to the Palestinian Liberation Organization (PLO) must be conducted so that Hamas, the Islamic Jihad and the Palestinian National Initiative can join it.

Furthermore, Haniyya stated that fair elections are the only way to participate in the Palestinian Authority, and added that his government is willing to create a positive atmosphere for reconciliation.

He further said that Israel is the main threat to the region, adding that the Israeli siege on Gaza has not been eased and that the Israeli claims regarding easing the siege are just a maneuver to delude the international community.

Haniyya also warned of what he called a “large-scale Israeli manipulation policy” by claiming that the al-Qaeda group is operating in the Gaza Strip, and strictly stated that the al-Qaeda has no presence whatsoever in Gaza.

He also denied claims that Palestinian groups are carrying attacks against Israeli targets from Egyptian territory.