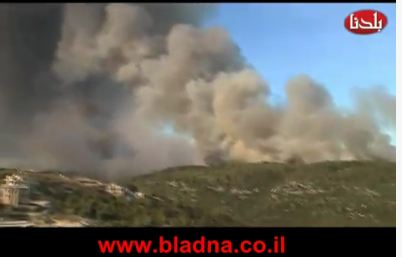 40 persons died on Thursday, dozens were injured and at least 13.000 were evacuated in Haifa and other areas north of the country as huge fires continued to spread across the Carmel Mountain and in other northern areas. Israel called for international aid to suppress the fires. The fires are threatening the city of Haifa while several prisoner guards were killed when burning trees fell on a bus transporting them.

Israeli daily, Haaretz, reported that firefighters from across the country rushed to the area in an attempt to control the fires, yet the flames continue to spread and more neighborhoods had to be evacuated.

Spokesperson of the Haifa Firefighting Services, stated Thursday that the fires are now out of control, and that there are no sufficient firefighting resources to put the fire out.

At least 35 bodies were found by dawn on Friday, while only 22 of the bodies were identified. Most of the casualties were students participating in training for the Prison Services Guards and were on their way to the Al Damon Israeli prison.

But a fallen tree blocked their bus and the flames trapped it killing 40 of its fifty passengers. A number of survivors were moved to hospitals in Haifa suffering serious injuries and burns.

Describing the fires as a disaster on a large scale, Israeli Prime Minister, Benjamin Netanyahu, rushed to the area on Thursday evening and requested international aid.

He said that Israel does not have sufficient equipment to deal with fires on this massive scale, and that ten aircraft were sent by Greece, Cyprus and France to help in countering the fires.

Netanyahu also stated that despite the crisis in relations with Turkey, Ankara also offered to help.

Haaretz said that mass evacuations started on Thursday afternoon especially in Tirat Hacarmel neighborhood as firefighters lost their battle with the raging fires, and that by early evening hours Thursday, at least 7000 Dunams (1700 Acres) of natural forest were largely consumed by the fire.

Furthermore, the Israeli police is preparing to evacuate prisoners from two prisons in the north, while students who live in Haifa University were also evacuated to a nearby school, 200 patients from a psychiatric hospital were evacuated to other hospitals near Haifa.

Although the reason of the fire was not fully determined, dry and massive heat in the country is widely believed to be the reason especially since the area witnessed an exceptionally hot and dry weather for several months, and this past November was described as the driest in 60 years.

The temperature in Haifa was 31 degrees Celsius (87 F) by midday Thursday, and wind speed was 30 kilometers per hour.