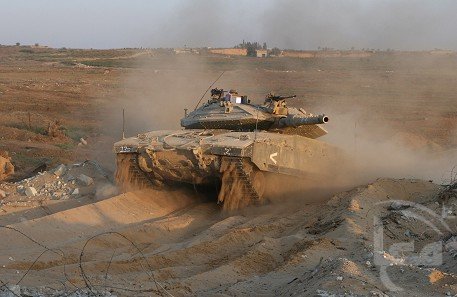 The Israeli Army claimed that two Palestinians were killed, Thursday morning, when a number of armed fighters attempted to infiltrate into an Israeli settlement, close to the border with Gaza.A statement issued by the Israeli military claimed that troops fired towards a number of armed Palestinians near the security fence of the northern area of the Strip, as the men were trying to approach the border ‘ from within the 300 meter buffer zone.’

After the attack, the bodies of two men were recovered within the boundaries of Gaza; weapons and explosives were found on the bodies of the two fighters, Israeli Radio reported.

Local sources stressed that a barrage of at least 15 artillery shells were launched by Israeli troops, reaching a nearby farm; damage was reported, no injuries.

Later on, the Israeli army conducted a limited invasion into the area, the Maan News Agency reported.

Also on Thursday morning, a Gazan boy, Muhammad Kaware’, was killed due to an electrical shock inside one of the siege-busting tunnels in the Rafah district, the southern area of the strip.