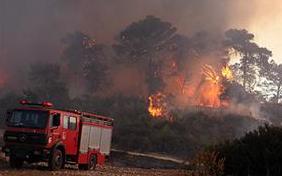 Amin Shooman, head of the Higher Committee for West Bank Detainees imprisoned by Israel, stated that all female detainees imprisoned at the Al Damoun Israeli prison were evacuated to the Hasharon prison due to raging fires in the north. Shooman told the Palestine-Info news website that initial information indicates that all fifteen female detainees are safe after they were moved to Hasharon.

Riyadh Al Ashqar, media coordinator of the National Committee for Supporting the Detainees, stated that after repeated delays by the Israeli army, the detainees were finally safely evacuated especially since the fire is close to the prison compound.

Israel reported at least 40 deaths after a bus transporting officers and prison guards flipped over while heading to rescue and evacuate fire casualties and residents in Al Carmel Mountain, Kibbutz Beit Oron and the Haifa University.

The bus carried 50 Israeli prison guards and soldiers who were evacuated from the Al
Damoun Prison.