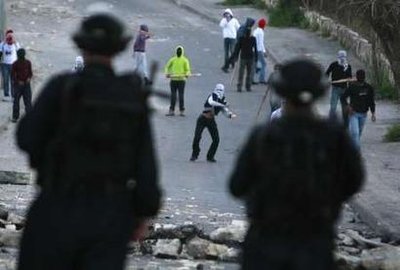 Clashes broke out in Al-Isawiya neighborhood, East Jerusalem, on Thursday evening, between dozens of Palestinian residents and Israeli forces, the Ma’an NewsAgency reported.
Confrontations erupted in the neighborhood of Al-Isawiya, in the northeastern part of the Old City, when Israeli troops were conducting patrols on the area.

According to an Israeli police spokeswoman, the clashes ‘were provoked by two Molotov cocktails thrown on a police checkpoint, at the entrance of Al-Isawiya’.

The incident follows news of Israeli bulldozers demolishing a home and print workshop, on Tuesday, in the neighborhood of Al-Isawiya.

Family members of the owner of the workshop, who attempted to prevent the demolition, were confronted with riot gear, arousing anger amongst the locals.

Tension has remained high in the area with sporadic clashes the next day, followed by a round of arrests carried out by the police on Thursday.